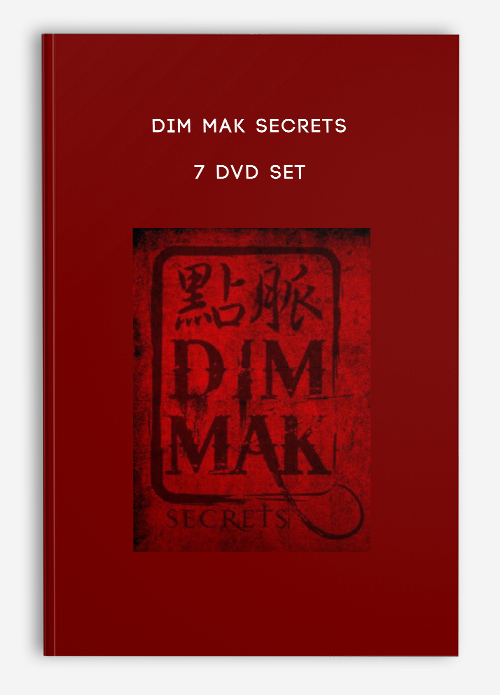 EVERYTHING YOU NEED TO UNDERSTAND THIS AMAZING ART.

Dim Mak DVD 1 – Foundation Within this foundational DVD, you’ll also learn… • A run-down of the striking techniques used in Dim-Mak (there are different ‘ways’ of striking to ensure a correct ‘hit’ on dim-mak points) – Steven runs through all of the best ones for you. (Fists do NOT work with Dim-Mak) • Specific, versatile, focused striking techniques that Dim-Mak Chinese masters use to hit points. Use with caution. • How to use ‘Shaking Energy’ like Dim-Mak Chinese Masters to harness the ‘over-the-top’ power of Dim-Mak, ensuring you go from rookie to someone who can cause massive damage to any opponent • How to FOCUS your energy on an extremely small point…this is the ‘secret’ to Dim-Mak and will cause untold damage to your attacker You’ll also learn the secret of the iron needle…Steven’s favourite striking techniques …and more… Dim Mak DVD 2 – Making things in the body go wrong

Up next on DVD 2 Steven Burton revealed the Shaolin concepts, principles and ‘secrets’ that actually make Dim-Mak work. I’m talking about things like Yin and Yang, using ‘opposites’ effectively, meridians and using the destructive cycle…how to affect Chi and make sure it ‘travels’ throughout the body…the ’12 times’ principle that means you can strike someone…and they only collapse a few days later. Principles of Yin and Yang and how to apply them to make things go wrong within the body of the attacker

Dim Mak DVD 3 – 12 Major Dim Mak points You’ll learn… • How to throw the heart out of sync using a certain point with the lion head strike = extremely dangerous material that is not to be shared with anyone. Use with extreme caution and NOT in training.

• How to ‘hook’ a certain point to make your opponent nauseous – yes, he will literally feel sick after this one

• A point that affects the person’s entire intestinal and digestive system – it will cause severe pain when struck then major problems afterward (when you effect the digestive system, all sorts of problems can ensue)

• A two-finger move that creates a ‘horrible feeling’, making your opponents legs collapse from under him…yes, using just two fingers…

• A point that, when struck correctly, will cause parts of a bone to ‘float’ off around the body…causing unheard of destruction and pain. Only for use in extreme circumstances.

• A huge point that affects the legs. When you strike this, it will also break the ankle as well as affecting the whole body – all at the same time. Use this correctly and your opponent will pass out – the pain is THAT over-whelming.

• The Dim-Mak ‘brain switch off’ point – using this is like hitting on ‘OFF’ switch on your opponent’s brain! Use it with the strikes Steven will show you and watch out – you can make a man crumble and lock him out with ease as his brain switches down.

• Further 12 Major Dim Mak Points Steven added another DVD with a further 12 of these secret and dangerous Dim-Mak points…and how to use them to best effect. So in total, you’ll learn the 24 Most Secret And Dangerous Dim-Mak Striking Points.

You’ll also learn… A point that causes disruption throughout the whole body. This is like a bomb going off in your internal organs

. • A super-easy target that can also be used in headlocks (yet no-one knows or thinks about doing this). Use this in any headlock environment and watch your attacker collapse.

• A ‘vessel’ point which can cause neurological symptoms if struck. It’s a ‘horrific’ pain as Steven states himself. By the way Steven has also used this on the ‘front-lines’.

• A point which is the human energy centre – hitting this will drain the energy right out of him and may even cause unwanted bladder movements.
• Blood pressure lowering point – causing knockout. Use this point in conjunction with a claw and pinch and you will get ultimate control over your attacker.

• A effective point that can cause sinus  membrane rupturing…even though it’s NOT on the nose!

You’ll learn how to take the knowledge you’ve acquired on the previous DVDs, and then actually be able to go out and use it on the street as a real ‘Combat System’. So you’ll know exactly what to do, and when. No doubts. Just ‘handed to you’ knowledge about exactly how to use these points in a variety of wide-ranging street situations.

• How to defend from a punch and cause the body to effectively ‘reset’ itself, causing your attacker to crumble like the proverbial cookie.

• How to TEAR muscles using a simple Dim-Mak manoeuvre that Steven will show you (I’d keep this one to yourself, and don’t use it when training with ‘friends’)

• Simple point that ‘releases’ a neck…allowing you to quickly knockout, fell or otherwise ‘damage’ your attacker

• A virtually ‘unknown’ Dim-Mak SECRET involving the eyes that will enable you to easily manipulate and play with your attacker. Very few people are aware of this, and it gives you a serious ‘unfair advantage’ on the street. Forbidden Dim Mak Secrets

• Advanced Dim Mak disk 1 & 2 These are the secrets that have been passed down for generations from Wu-Dang mountain…and that few people will ever get to see.

• How to shut down an organ, so a person will need treatment to survive

• A LUNG point that can actually cause the lung to collapse. You can guess the effects of this for yourself.

• A simple PALM point that must be struck at a set time to cause maximum damage. This actually affects the heart.

• A navel point that must be hit at a certain time that will affect the digestive system, causing let’s just say ‘ill’ effects at a later date (Steven will explain in full on this ‘forbidden’ DVD) … and much much more OK, I’ve told you what Steven has created for you here – a tour-de-force ‘everything revealed’ 5-DVD Set…

PLUS an extra 2-DVDs on ‘Forbidden Dim-Mak Secrets’ (that’s 7-DVDs in total).

• A Grand Master based out of Okinawa, who taught some of the most powerful principles you’ll ever see. Fortunately, Steven has managed to track, hunt down and ‘collar’ for you the old pressure point and Dim-Mak secret drawings of Hohan himself…yes, the original Okinawan master’s secret pressure point and Dim-Mak charts that few people will ever be able to access, and that contain the best Dim-Mak ‘Death Touch’ points.

And there’s still more… Additionally, you’ll also get a workbook that solidifies the principles on your DVD… and an additional CD called ‘Dim Mak Masters Secrets’ which will further your understanding even more still. And…and…you’ll ALSO get a further two Dim-Mak wall charts! These can be used in your training, or to remind you of the information you’ve discovered.

It’s a HUGE package of information as you can see…and the quickest and easiest way to learn this devastating art. The Holographic Disclosure by Mike Friedman Systema – Beyond the Physical